Checking Your Bags Before Marriage 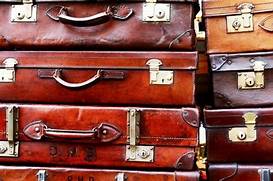 There is a statement that originated with newlyweds soon after they would return from a fun-filled honeymoon and then begin to settle into the inevitable monotony of everyday life, and that statement is “the honeymoon is over”. This statement has now become a cultural metaphor for the first hint of trouble in any type of relationship, connection, friendship or business partnership. I believe in the marriage relationship scenario it goes a little deeper, as we let down our guard in the relationship, we risk exposing the evidence of our baggage that we have worked so hard to suppress.

There is a funny scene in an old episode of Mr. Bean (a goofy character in a British sitcom) where he is leaving for a trip and is struggling trying to pack several large suitcases in a tiny little British car, the harder he tries to pack the bags in the car the funnier his clumsy antics get. This comical scene also serves as a metaphor for the underlying issues and repetitive battles that present themselves in a marriage relationship. Now the list of possible baggage could be extensive and never-ending, so for clarity sake let’s just consolidate them into five different types of baggage that represent the full gamut of baggage possibilities.

Bag 1- The Entitlement bag-   Someone toting this bag around may have been raised in a parenting style where one or both of the parents tried to be their best friend instead of their parent. This child was never told no, never forced to take responsibility for their actions, never having to experience the consequences for bad behavior. Imagine what happens when this person is married or in a serious relationship and the time comes for them to give, serve or unconditionally love their partner. A core principal of a successful marriage is the ability to put the other partners needs ahead of your own while simultaneously putting down your own selfish desires.

Bag 2- The Abandonment bag– Several scenarios can produce that feeling of abandonment, death of a parent, not only watching your parents divorce but feeling left out by one or both of them, or simply the disinterest by one or both of your parents. This feeling of being completely and utterly forsaken and forgotten changes who a child is and could become. This seems to show up in an adult in one of two ways, either they become extra clingy and or co-dependent, or it produces an attitude of “I don’t need you, I can make it without you”, both of these responses are unhealthy coping skills and serve as an enormous hurdle in any relationship.

Bag 3- The Family of origin bag-  While DNA plays a vital role in all of the external elements of a person, hair and eye color, tall or short, body type etc. there are a few intangibles that play a vital role in a child becoming the adult that they will be. Experts say that by the time a child is 9, 80%-90% of their worldview is already in place, whether they will be introvert or extrovert, stingy or giving, thinker or reactor, driven or lazy and the list goes on. You can see how this translates into possible future baggage based on one’s environment, modeling, community/tribal influence and parental behavioral predispositions. Take a look at your primary role models growing up and you can glean some valuable insight into your possible future actions.

Bag 4- Starvation bag-  This bag is similar in a way to the abandonment bag in the way the behavior plays out, but it differs in a couple of ways. Maybe the was no death, divorce or obvious abandonment but there was and unsaid and unwritten behavior that felt as though you were only acknowledged when you did something good, performed at a high level and pleased those in who were your authority. What often happened is when you didn’t perform, didn’t please or didn’t do right the was little to no attention or feelings of acceptance or love, at best there may have been negative attention which warped our value system and we settled for negative attention over no attention at all. This often produced two behavioral paths, first this idea that you have to please everyone, you sacrificed your dreams, goals and pleasures just to make someone else happy and maybe then they would love you, everyone marveled at the high level of effort to please and thought you were amazing when the truth is you were starving. Second, you develop a working operating system that walls everyone out, you keep people at a safe distance so as not to allow any possible chance of being hurt again. You do not have to be a marriage counselor to see the damage this could cause in a relationship that is to be built on love, trust, intimacy and open honest transparency.

Bag 5- The Abuse bag– The current statistics on abuse, physical, mental, emotional and sexual are staggering, whether the incidents are actually increasing or it’s just that more people are coming forward and disclosing the abuse, the truth is there are millions of hurting and wounded people. For those who have experienced abuse and have not gotten professional help, they need to know that while you may have shoved that down so deep you think that It’s in the past and somewhat toothless, the pain and unfinished business of the abuse lies temporarily dormant waiting for a time and reason to surface in your life and destroy any and all relationships you have or will have.

While this list of baggage is certainly not a comprehensive list it does serve as a reminder to all of us who are in relationships or will be in relationships, that the effects of the baggage must be dealt with in order to increase the likelihood of successful future and current relationships.