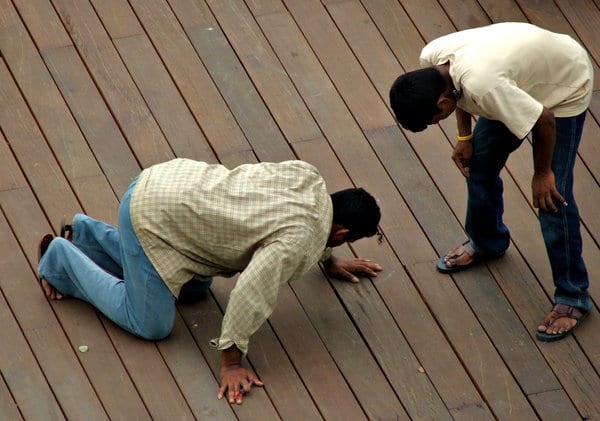 The other day I was talking with my friend Cliff who works at the Phoenix Rescue Mission. We have a mutual friend who had just been severely injured in a motorcycle wreck and we spent some time in prayer for our brother. The conversation of our topic turned to caring for other people. I shared a story with Cliff about one of the guys I had been working with at the mission named Jeff. I had been mentoring Jeff for several weeks when one day he looked at me and said, “it’s finally nice to meet somebody that actually gives a shit.” I took this a great compliment. Cliff busted up. He proceeded to tell me about an old timer he once knew. Apparently, the man was having a really rough day and one point told Cliff, “I lost my give a shit.” We both laughed. In context, the man was upset with himself because he had been so self-absorbed he lost caring for other people. The man wanted to get his “give a shit” back!

We all go through times in our lives when it seems the world is all about us.  Wouldn’t you agree? I went through such a time a few weeks ago, when I was praying in my Jacuzzi (I know, first world problems right?). I’m not proud of it, but I found myself complaining to the Creator of the universe about things that really were not all that important. As I continued to pray and found myself making the time completely about me. I know I wouldn’t want a friend who complained every time we met, I guessed maybe God didn’t want this from me either. Frustrated with myself I stopped praying and apologized to my creator. Suddenly the therapy jets shut off and I was launched backwards into the seat. There was complete silence.

During this silence the Holy Spirit whispered to me, “your living in the flesh.” I meditated on this for several more minutes and found myself slightly pissed but in total agreement. This thought stuck with me for the remainder of the week. In the most gracious way, my God rebuked me. I knew full well what was being communicated in this silence. I had once again made life all about me!

Here’s the point I believe Paul is really trying to drive home; life is not about us! It’s about other people. We have been given this amazing freedom to live in the love of God and we are to share that love with other people. Paul reminds his audience the law is fulfilled in one command: love your neighbors! To put it bluntly we need to “give a shit”about other people. We need to love them. No strings attached!

Genuine caring for other people is in short supply today. Don’t believe me, talk with the next homeless person you see. I recently went out on the streets of Mesa, AZ to try and be a blessing to some of the homeless people in my own back yard. We call this ministry Name2AFace.It’s about putting a name to the face of homelessness in our community.

I had the privilege to talk with a young woman named Skyy Smail.

At first Skyy was reluctant to talk. When she learned, I had no agenda other than to be a blessing, she shared here story. During our conversation, I asked Skyy about here biggest need on the street; without hesitation, she said, “care and concern.” I was floored. In other words, she simply wanted someone to “give a shit” about her! She wanted to be treated like a human being and not met with judgmental glances or obvious attempts to ignore her existence.

I learned a lot from Skyy that morning. I learned that people simply want someone to acknowledge them and show some care and compassion. I learned that when my “give a shit” has been replaced by “woe is me” I need to I need to get over myself and simply go out and love my neighbors!